The Citizen has been named best student journalism publication for 2016, landing the Dr Charles Stuart Prize in this year’s Ossie awards. 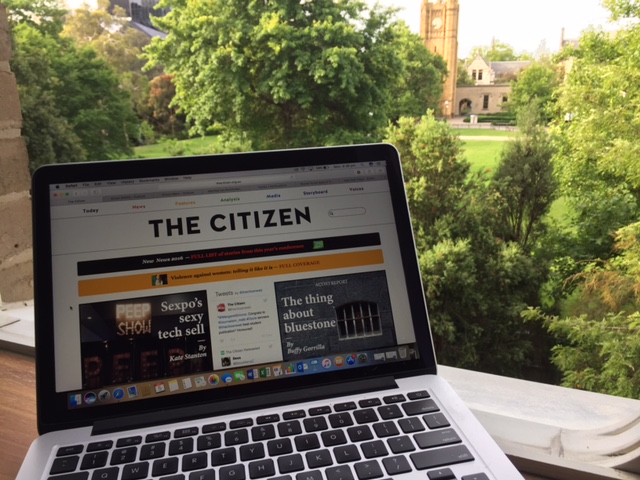 The Ossies are sponsored by the Journalism Education and Research Association of Australia and honour the memory of journalist and war correspondent Osmar S White.

The Citizen’sBuffy Gorrilla also won the prize for the best audio story of more than 2 minutes, while Jack Latimore won the inaugural John Newfong Prize for reporting on Indigenous affairs.

The judges described The Citizen as “a first rate example of a news site of professional quality that showcases the outstanding work of students. It has an exciting feel to it and is easy to navigate with high-level content.”

Gorrilla won for her report ‘Aquafaba: the egg substitute vegans have been waiting for’.  A version of the story also played on the Radio National program Blueprint For Living.  Liam Clark was highly commended in the same category for his report ‘The Asia-Pacific dreams up its own Eurovision’.

Gorrilla’s report, according to the Ossie judges, “stood out from the rest – particularly with her use of natural sound, story-telling and talent.”

Latimore, an emerging voice in Indigenous commentary, was recognised for his stories ‘Damage done to stolen generations at risk of being repeated’ and ‘Justice as elusive as ever 25 years after Deaths in Custody’. “There is a maturity about the storytelling and it hits the mark in terms of what Indigenous affairs reporting should be doing, which is ensuring that authorities and the governments are kept to account over the shocking social equity gap between Indigenous and non-Indigenous Australians.”

Maria Abbatangelo was also highly commended for her investigation into railway platforms gaps following the death of a teenager at Melbourne’s Heyington station.

A full list of this year’s Ossie winners can be found here.

THE CITIZEN is a publication of the Centre for Advancing Journalism. It has several aims. Foremost, it is a teaching tool that showcases the work of the students in the University of Melbourne’s Master of Journalism and Master of International Journalism programs, giving them real-world experience in working for publication and to deadline. Find out more →

Stay up to speed on the latest news and events at The Citizen.